All photos credited to The Eric Carle Museum of Picture Book Art.

Recently an Art Studio Intern, Emma Tavolieri, designed and led a Special Sunday activity for our Museum guests with the theme “Inspired by Animals.” The following is Emma’s report on her process and the day:

Often times with art projects, we face the question, “where do I begin?” Starting a project from scratch can be intimidating, but also provides the opportunity to explore and experiment with the creative process.

Designing a Project from Scratch 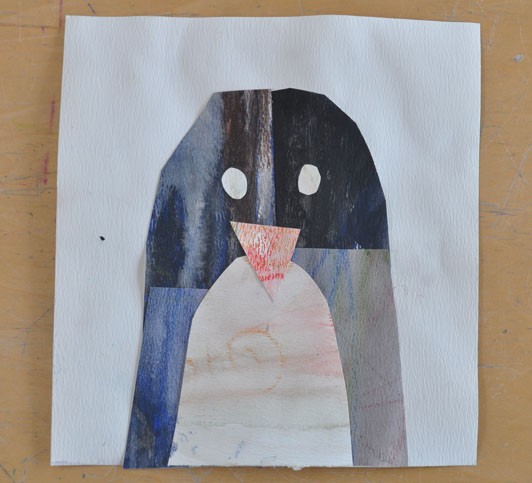 A little inspiration can go a long way. The initial inspiration for this project was drawn from a collage by Eric Carle in the The Art of Eric Carle: Seasons exhibition in the West Gallery titled “Yes! A penguin has a mother too.” The piece is part of his book, Does a Kangaroo Have a Mother Too?

The first step in designing this project was simply to experiment with collaging a penguin.

After the penguin, we experimented with making collages of other animals. A purple cat, a hungry caterpillar and a few other animals later, we noticed the collages could use a little something extra. Adding frames to the collages made them seem more like portraits. We explored the ways that we could incorporate frames in the project.

Members of the Art Studio team decorated large frames using tissue paper (with liquid starch as an adhesive). These frames would later become the display for showcasing final projects in the Art Studio space. Utilizing the collaging technique across multiple mediums added to the general theme of the project.

We also came up with the idea of framing each animal portrait individually. By gluing on a larger piece of construction paper underneath the collage, it created the appearance that the collages were framed. 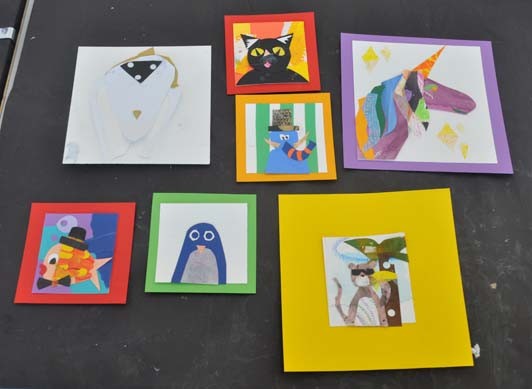 When considering the various sizes of paper we would use for this project, we found that offering three different sizes would work best (2.5×2.5”, 5×5”, 6.5×6.5”). By doing so, guests could better consider the amount and level of detail they would like to include. 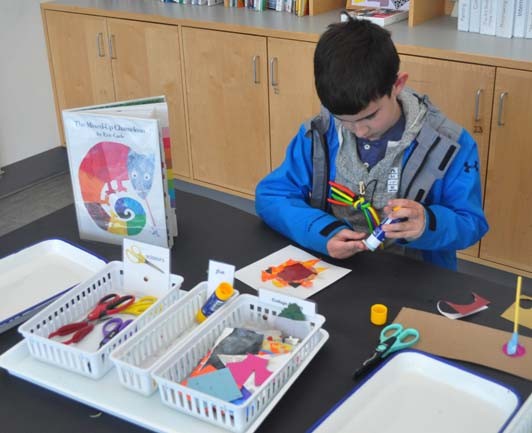 Execution: The Many Interpretations of the Animal Portrait Project 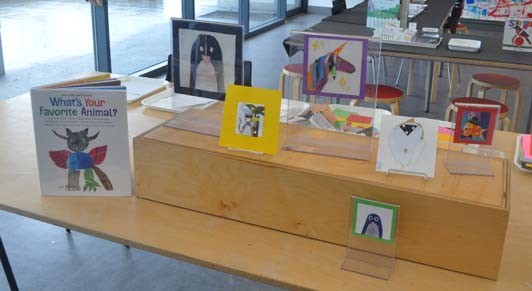 In coming up with a prompt for the project as guests came into the Art Studio space, we drew inspiration from the book, What’s Your Favorite Animal?  By Eric Carle and Friends. Introducing the project this way established a topic of interest to the guests, and also eased with the process of “where do I begin?” There were numerous ways in which museum guests approached the project. 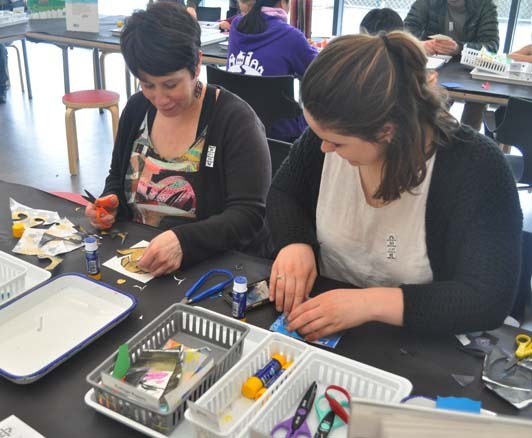 “It was intimidating at first being handed a blank sheet of paper, but once I decided I was going to make a dog, a lot of it came naturally” said one museum guest. 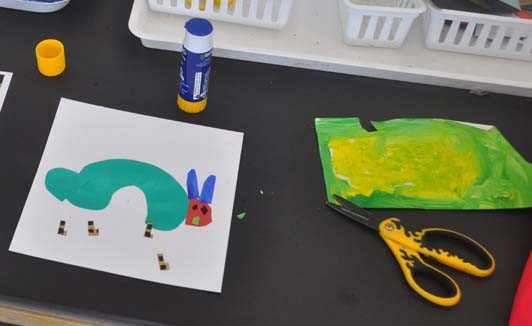 Other guests drew inspiration from the books we had on display. Does this animal portrait look familiar? 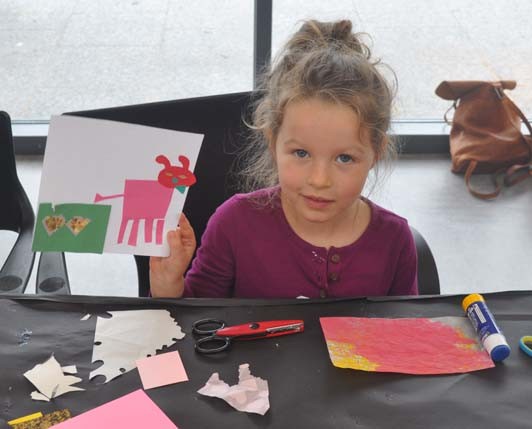 Another strategy for creating an animal portrait – imagination! This guest decided to make a pink dog with a red head. 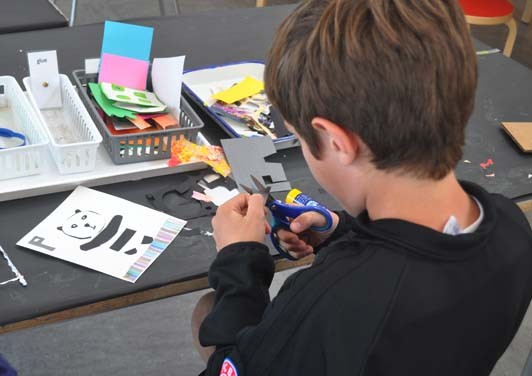 Here is a guest who not only collaged an animal – they experimented with collaging letters, too. 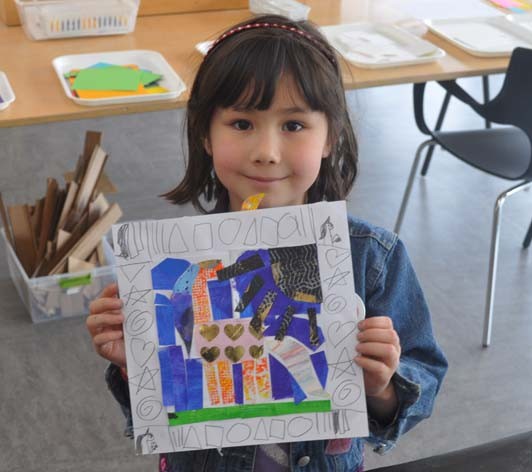 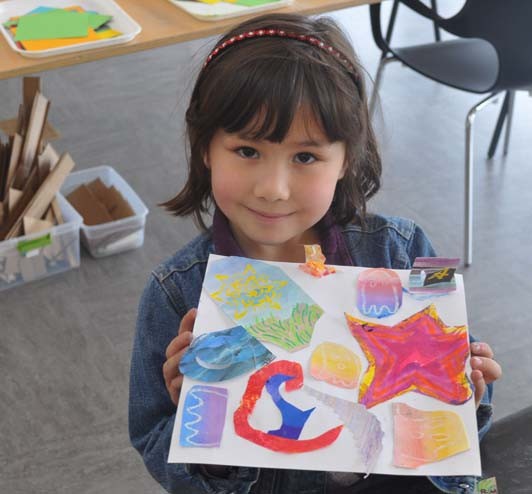 A handful of guests designed both the front and the back of their paper. 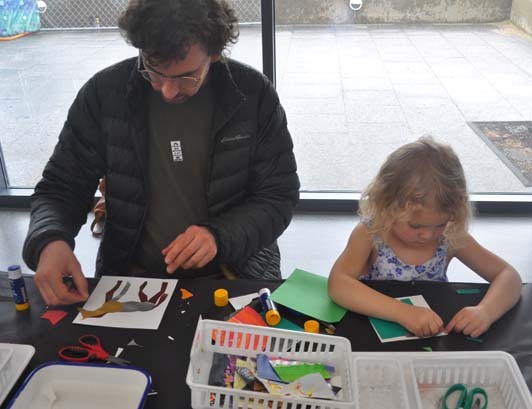 Some families even drew inspiration from each other! This duo each made their own version of a horse. 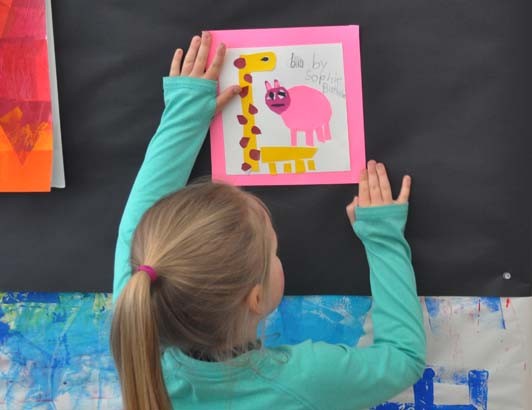 The process of designing and executing an art project was a process of trial and error. Drawing inspiration from others was a prominent theme in this project in particular. Getting feedback from the Art Studio members during the design process was helpful for anticipating obstacles during the project execution. One of the most exciting parts about the project was seeing the variety of collages made by museum guests!